The prisoner’s dilemma is a popular introductory example of a game analyzed in game theory that demonstrates why “rational” individuals are unlikely to cooperate, even when it could be in both of their best interests to do so, a win-win scenario. The prisoners dilemma game above simulates both what we’ll call the classical example, two prisoners being interrogated and the iterated version of that game, where players can respond and change their strategy over time.

The traditional prisoners dilemma works as follows, you and your accomplice get caught committing a crime. The police interrogate you separately. Before you are carted off, you promise not to snitch on each other.

Over the course of the “interrogations” by police the following things can happen:

Play how you want to, and see what happens: 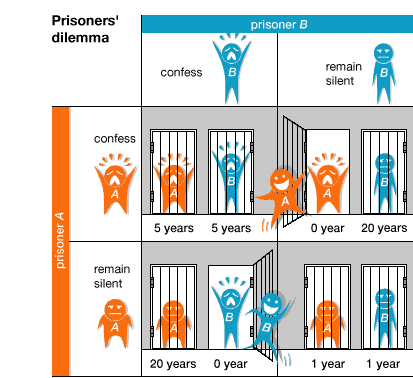 In a multiple-moves Prisoner’s Dilemma game you can play against the same partner many times. This simulates mutualistic interactions in social groups where individuals will frequently encounter each other. An example of cooperative behavior which appears to be a multiple-moves game is mutual grooming for parasites, which many animals do, including chimpanzees.

What is The Prisoner’s Dilemma?

Traditionally the Prisoner’s Dilemma game has a dominant strategy of betrayal. Given that you have two choices, defect or cooperate, you’re really choosing to:

1) Defect, and get the best or third best result (0 years, or 5 years of prison)

2) Cooperate, and get the second best or worst result (1 year in prison, or 20 years in prison)

Obviously you’d be ignoring your partner, but if the result of them defecting and you cooperating is 20 years of prison for you, it’s highly unlikely they, or you won’t take the 0 or 5 year option. Even though you’d both be better off cooperating with each other and each being in jail for one year.

Since betrayal rewards far better than cooperation (and avoids a massively worse result) all purely self-interested people will betray each other. The reason why the Prisoner’s Dilemma is so titillating is because rational choice would lead each prisoner to betray, even though both cooperating would be best.

Over a single turn, or over a multiple turns between players, the Prisoner’s Dilemma framework can actually be applied to many social situations in life and business. Imagine that you had a friend who consistently relied on you for money and was always borrowing things, but never spots you when you need some cash? This might be an example of a strategy where they are always willing to defect from cooperating with you, and rarely decide to cooperate with you in a meaningful way. And that same principle can apply to sharing kills on the savannah or grooming between primates in large groups. Indeed within animal cultures and across animal ecosystems there are many opportunities for mutualistic behavior and cooperation.

This same application can be true in groups and across companies. Have you ever worked on a group project where you felt like you were doing all the work. It could be said that your colleagues were “defecting” from cooperative behavior. In a multiple-moves Prisoner’s Dilemma game you can play against the same partner many times. This simulates mutualistic interactions in social groups where individuals will frequently encounter each other.

In the Prisoner’s Dilemma game simulation the prisoner’s are not allowed to communicate, and thus collude or reassure each other over time. Since they are making their decisions at the same time it would be considered a simultaneous game, and can be analyzed using the four square game payoff matrix referenced above.

Some Drawbacks of the Traditional Prisoner’s Dilemma

1) You have no preplanning with the other player, and no way to communicate.

2) The best and second best outcomes can occur if you do snitch.

3) The worst outcome will happen to the person who doesn’t snitch.

Depending on how you set-up your payoff matrix the game’s mechanics could actually get flipped on it’s head. If the best result and worst result is for both prisoners to cooperate, and the second and third best results are for cooperating, then cooperation becomes more appealing. And in reality thatis typically how the payoff matrix actually exists (in democracies or states with good legal systems) So if the DA has no case if no one snitches, then the best outcome is for each person is to always cooperate, and never snitch. But people usually do, since you have no guarantee at the end of the day as to what will happen. That said, as we’ll read in the next sections, there are many successful cartels, wherein companies cooperate on pricing instead of defecting, and they manage to maintain these systems for years.

Without collusion prices will be continually driven down, in what Adam Smith described as competing away profits. As you can imagine in a market, cooperating with the police is essentially equivalent to cutting your prices or defacing with your “competitors.” You’re likely to see significant top line revenue growth if you can cut prices and the competition can’t. But once they do so the competition does so as well and everyone ends up with less. As you could imagine this type of competition which is quite common eventually leads to a situation in industries where only a few firms are able to compete and capture any value. And as they become more concentrated they are able to collude more efficiently and capture more value from the market. Rather than competing the M&A spree and concentrating more… 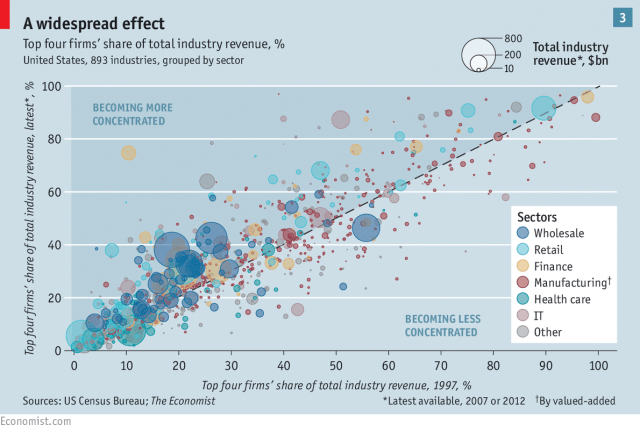 Source: “To Much of a Good Thing” by The Economist.

Background to the Evolution of Cooperation

While this may not apply to markets (necessarily) the prisoners dilemma and game theory have a wide ranging impact on social constructs and every animal culture in the world.

Any animal that lives in a groups evolves social behaviors like cooperative hunting and defense against predators. Since animals hunt together they have to opportunity to display cooperative behavior, or “altruism” wherein they at some cost to themselves can do something that benefits another member of the group. This “charitable” behavior would go against a baseline reading of Darwinian “survival of the fittest” but since cooperation among the group increases their total chances of survival it actually reduces the pressures of natural selection on those who are charitable.

While the idea of reciprocal altruism in kin selection intuitively makes a lot of sense (after all you want your whole family to be successful and “have a good name” as much as you want your kids to be successful) But what about individuals that aren’t related? In this case you behave altruistically to these non-members of your family, or group, or even species (think about those fish that follow sharks around) with the expectation that they will help you. These type of cooperation/defection games are non-zero-sum games. Both parties can win by cooperating. This differs from other types of social and business interactions like predator-prey relationships, that are zero-sum game. So you setting beneficial prices with a direct competitor can be a non-zero-sum game. For example if people like playing 3D console games, that will grow the entire 3D console game market, it’s a non-zero-sum game, you can both grow the market with your marketing dollars because you’re generating a new demand. But fi you’re both killing older non 3D immersive games through the proliferation of your consoles, then you’re dealing with a zero-sum game. You putting those out of business is a zero-sum gain, because they lose as you start to win.